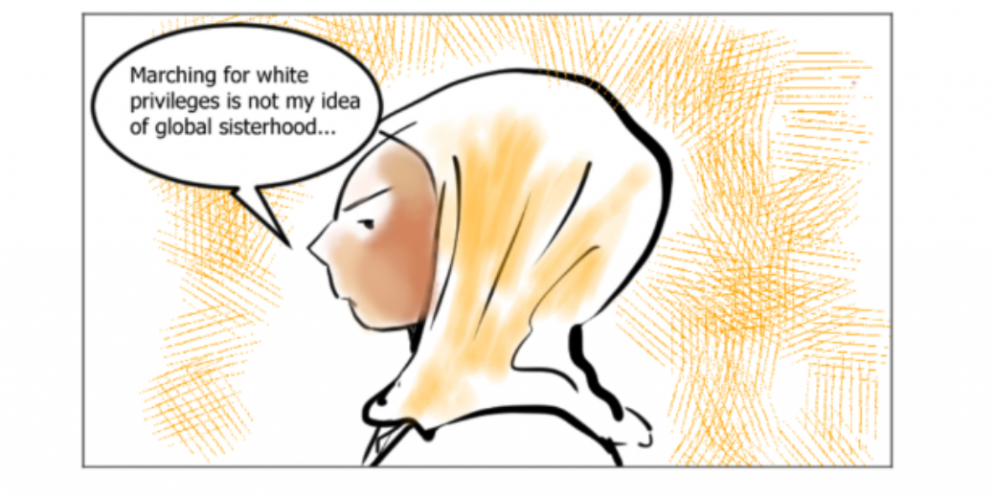 An anti-intersectional “feminism” in which we are described as a “side issue” is many things, but it’s not feminist. Unsurprised but still a bit disgusted, we have been watching the past few days as white feminists have described us and our daily experiences as “lone wolf” debates, “side discourses” and “special interests.”  In contrast to the protests in the USA, we were unable to get our voices as Muslim women to the podium, nor were the voices of other marginalized women represented there. Therefore we would like to collectively take a stand here.

On Saturday, in Vienna as in many cities around the world, a Women’s March took place. The goal of the Women’s March on Washington was to send a clear message on the Trump government’s first full day in office. Worldwide, millions of people- amongst them women, people of color, Muslims, women refugees, LGBTQIA+ persons, immigrants, and workers-  raised their voices against the patriarchy.

In Vienna, the Women’s March was organized by an American woman and an Austrian activist. During the course of the preparations other organizations became involved in the planning, amongst them the women’s wing of the (Austrian) Green Party, the Austrian “Frauenring” (a network of women’s organizations), Democrats Abroad, Platform 20000 Frauen, One Billion Rising, and WAVE, as well as the Neue Linkswende.

However, no immigrant organizations, representatives of the LGBTQIA+ persons of color communities, of the Black community, Trans persons, refugee women, disability activists or women of color collectives were involved in the organization. Nor were any women of color included as speakers. It seems the only attempt to introduce “diversity” into the speakers lineup occurred in the form of a Muslim speaker, Amina Baghajati, who was initially invited and included in the lineup of speakers on the march’s Facebook planning page. She was later uninvited by a member of the ranks of the Green Party women’s wing who was part of the march’s steering committee.

On the event’s Facebook page, it was reported that the speaker was “unable to attend,” leaving the impression that she had canceled herself at the last moment. But after activists from Network for Muslim Civil Society spoke directly with Baghajati and offered a replacement speaker, it became clear that the cancellation was not on the part of Amina Baghajati but rather had been issued by the march’s planning committee. A few hours earlier in the day, upon the announcement of Baghajati’s being “unable to attend,” the organizers did not accept the offer of a replacement Muslim feminist speaker, but stated that a new person could not be added to the speaker list so close to the march time as it could cause tensions.

That led to a series of protests on the Facebook Event page of the march with the hashtag #whyIcannotmarch, with the result that Muslim women who had planned to attend the march did not do so.

In an official statement by the march initiator posted on the march’s Facebook page and sent to the press,“In some of the supporting organizations for the Women’s March there were interventions against Amina Baghajati’s speech. … Unfortunately these interventions were sent forward – without our knowledge – to Amina Baghajati. Under those circumstances Amina Baghajati didn’t feel welcome.”

Based upon this official statement that the march organizers had not uninvited Baghajati, Muslim women who were rightly criticizing the exclusionary practices had their credibility questioned on social media by white persons who declared themselves anti-racists and drafted statements to this effect. On top of that, Muslim women were entreated to silence themselves to avoid further “division.”

This is not about the defense of the specific individual who was invited (and then uninvited!) to speak from her perspective as a Muslim woman. However, it is indefensible to us that a Muslim woman speaker was listed on the speakers’ list, and then later excluded and explicitly uninvited by members of the organizing committee.

The email retracting the invitation, which was sent by Ewa Dziedzic from the Green Party women’s wing, provides the following reasons: “Since only three persons will be speaking about the general motivation behind organizing the march in Vienna, and many people are against opening up specific/special debates and side issues there, I hope that you will be understanding about the last-minute cancellation.” (translated from the original German)

Those who stoked anti-Muslim speech in the planning of the march, which resulted in the written cancellation being sent, have been and continue to be systematically protected. Thus far, there have not been any statements by the main organizers about the content of the internal interventions against the Muslim speaker.

It’s not the first time that black and other women of color have been portrayed as aggressive or overly emotional because they condemn exclusionary practices by white feminists that negate the lived realities of people of color. When they turned away the offer of a replacement speaker, we saw how seriously we should take the “solidarity” that the organizers expressed in their statement in actual political practice.

A March of the Privileged?

Worldwide, women rose in solidarity to support their sisters, to support minorities and to send an unmistakable signal of unconditional solidarity. In her brilliant speech, Angela Davis pointed to evident historical continuities, and made it clear that an inclusive and intersectional feminist practice means that for all of us, we must join the resistance against racism, Islamophobia, anti-Semitism, misogyny, and capitalistic exploitation.
(https://www.youtube.com/watch?v=TTB-m2NxWzA)

As millions of protesters worldwide followed the intersectional agenda of the Women’s March, in Austria the women who are on the front lines of neoliberal, nationalist, authoritarian, creeping right-wing fire were excluded. As white women shamelessly spoke about and over women of color, the latter were dismissed by many as aggressive and emotional.

Especially in light of Trump’s victory, increasing attacks and discrimination against minorities and Muslims in Europe, as well as the daily institutional and individual violence inflicted by white people which we, women of color, black women, and Muslim, headscarf-wearing women are confronted, a collaboration would have been necessary to underline the international agenda of the Women’s March.

Care should have been taken in the early stages of the planning process to ensure that that marginalized groups were adequately represented in the organizational team and could have a voice in developing the march program and speaker list. Had that been the case, we could have talked about genuine solidarity.

A white, feminist practice that (re)produces and places the interests of white, heterosexual, cis-gender, able-bodied women at the center, is inherently exclusionary and actually represents the “special interests” of the most privileged women amongst us. A feminist political practice in which racist, Islamophobic, sexist violence against women is described as “side debate” and in which black women, refugee women, people of color, LGBTQIA+ persons and Trans persons are not included is not a truly feminist practice as far as we are concerned.

Not only the past few days, but the pervasive, historical, regularly-recurring experiences of black women and other women of color demonstrate the absence of intersectional practice in Austria.

Solidarity Must be Lived

In the face of the global crisis of capitalism and the rise of authoritarianism and nationalism, the strands of patriarchal, racist, and anti-ecological structures converge. These structures are reflected most prominently in the recent rise of right-wing, conservative powers.

In Austria, too, Trump-style populist politics are being acted out at the expense of Muslim women, and with that Muslim women’s efforts to achieve equal opportunities and self-determination are destroyed.

Movements like Black Lives Matter and protests like Standing Rock manage to position themselves as simultaneously anticapitalist, intersectional, ecological social movements that live out a political practice that fights for social justice for all. This is the approach on which we must orient our own political practice.

We don’t need people speaking on our behalf, diversity quotas, white intercessors or rescuers, tears, or above all, self-declared anti-racist positioning statements. We have no requests or questions and will not be deterred.

Those who truly want to show real solidarity must accept the leadership and real decision-making power of women of color and Muslim women in political work. Solidarity means listening, accepting, and especially letting us speak, without coopting our knowledge and passing it off as your own. It is even more important for us to continue to create and maintain our spaces and to network internationally. This is why we will be holding a conference for activists in intersectional feminism in Vienna.

We, Muslim women, will fight in every battle against every kind of defamation and disempowerment. Our voices must be present in feminist discourse and space must be made for our concerns in civil society, the media, and political platforms. Under no circumstances do we want people to speak for us: we can speak for ourselves!.

Addition to our statement: Upon request of the Congress of Polish Women in Austria (Kongres Polskich Kobiet w Austrii) we would like to rectify that they co-organized the Women’s March Vienna. However as the only migrant organization, they were not listed on the webpage of the Austrian “Frauenring,” where we got the information about the co-organizers.